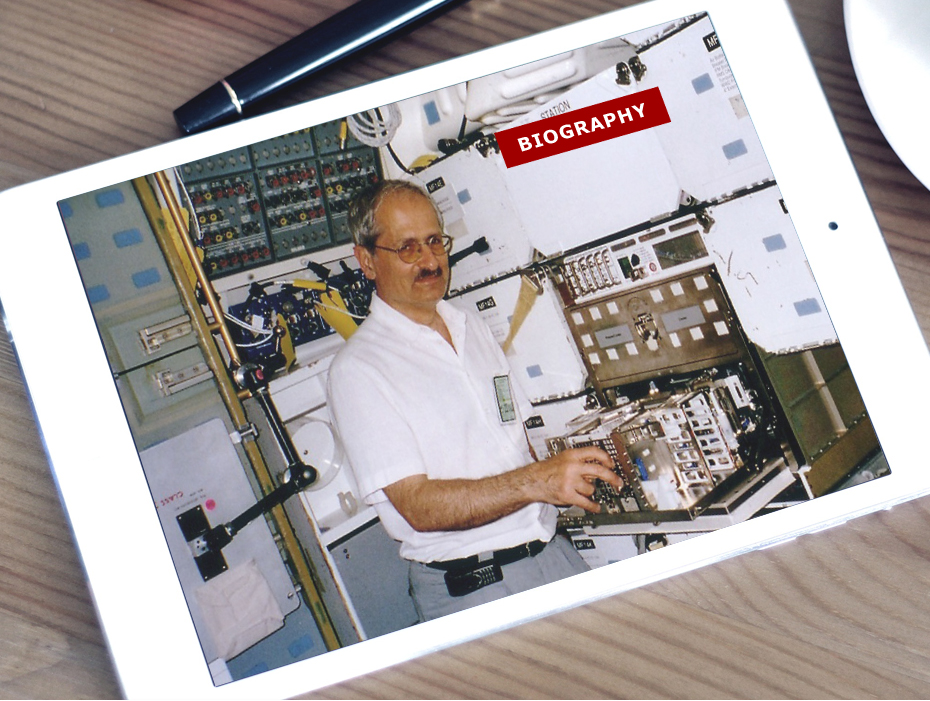 Dr. James Kass holds a B.Sc. in Physics and Math (Montreal) and an MS in Physics (Ann Arbor, Michigan). He completed his Ph.D. in physics in Leeds, England, before joining the Max-Planck Institute to research in Nuclear Physics. He then joined the department of medicine at Joh.-Gutenberg University, Mainz, Germany, where he researched in Neuro-physiology and space medicine for eight years, working on two Spacelab missions. He coordinated the European SpaceSled experimenters teams and was responsible for crew training, crew procedures, and ground operations, communicating directly with the space crew.

Following this he worked for the aerospace industry in Bremen and Munich in the sectors of space operations, tele-medical research, artificial intelligence, and human behaviour, performing pilot experiments under-water, in parabolic flight, and testing and validating procedures, experiments and telemedical equipment running on the MIR station during the MIR97 mission. He has worked intimately with cosmonauts of the Russian Salyut and MIR space stations, as well as with astronauts on the Apollo programme, Skylab, Shuttle, and ISS. In addition, he was involved in several space simulation isolation studies in Cologne (Germany) Moscow (Russia), and Toronto (Canada).

Over the years he has taught at various academic institutions: he has been Adjunct Associate Professor at Concordia University, Montreal, dept. of Applied Human Sciences, where he lectured and carries out research in human behaviour; he has lectured at the International Space University in Strasbourg and Barcelona (summer session); he continues to lecture at University College London, Centre for Altitude, Space and Extreme environment.

In addition to academic and scientific work, he was deeply involved in design and testing of experimental hardware set to fly on the Space Shuttle and the MIR station; testing included vibration, emc, and functional testing of equipment. He also trained the crew to operate the hardware and software, and carried out ground operations during various (human) space missions, leading international teams to perform the work.

As part of the work in human spaceflight, for the last decade Dr. Kass worked in the domain of Telemedicine & eHealth for space as well as terrestrial non-space applications. He was a founding member of the Telemedicine Alliance from 2002, a collaborative endeavour involving the European Space Agency (ESA), the World Health Organisation (WHO), the International Telecommunication Union (ITU) and (funded by) the European Commission (EC DG-IFNSO); the work covered almost all aspects of ICT in healthcare (eHealth) including organisational, clinical, educational, and financial, covering a wide gamut of domains, including operational, technical, legal, and administrative. This work brought him into close relationship with government agencies and ministries across Europe, as well as standardization bodies, where he has been called to advise and participate in expert working groups.

Throughout most of the 35 years of his multi-disciplinary professional career Dr. Kass has worked in the domain of human spaceflight (since 1980), uniquely spanning the very different infrastructures of academic research, industry, and the Agency. But, he has also run his own companies and has been on the board of directors of several companies and international institutions in several countries. Thus Dr. Kass' career has been multi-disciplinary andmulti-national He has had long experience working with international and national agencies, industrial and research institutions, medical centres and hospitals, in most countries of Europe, including many of the new accession states, as well as Russia, USA, Canada, China and Japan.

Since 2000 Dr. Kass has been working in various divisions at ESA/ESTEC: In the Directorate of Human Spaceflight, in the domains of operations, safety, biomedical experiments, eHealth and telemedicine, dual-use technologies, and business. In 2007 he joined a special task force for ESA’s DG in setting up a programme for integrated applications (Integrated Applications Promotion – IAP), after which he worked in the directorate of Telecommunications & Integrated Applications, in the division of awareness and feasibility studies. Amongst his tasks he was responsible for organizing workshops, meeting with diverse senior governmental and industrial representatives. In this context he designed and launched a cross-directorate website on ESA’s activities in the domain of health, as well as the IAP programme website.

In 2010 he founded his consulting company, and started working for the Inspector General’s department at the Agency, in the office of Engineering Knowledge Management. In the same year he was nominated as Expert for the European Commission’s Security Research Unit. In 2011, he worked for the Product Assurance and Safety Department, and has been Secretary of the ESA Lessons Learned System.

Dr. Kass has authored numerous publications in scientific and technical journals, and made presentations at many international scientific symposia, congresses, workshops, trade fares, and EC and inter-governmental working groups. In recent years Dr. Kass has been frequently invited to give key-note speeches and presentations at universities, trade fares, and industrial platforms, and chair international conferences. He is currently reviewer for scientific journals: Aerospace Medicine & Human Performance (AMPH), and Journal of Scientific Research and Reports (JSRR).